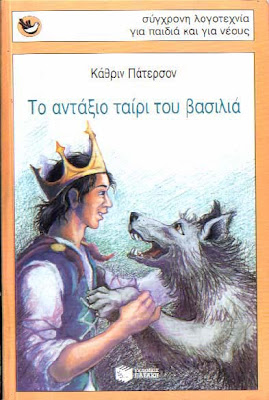 A selfish, conceited prince is tormented by the dying words of his wise father, the benevolent king: "You will not wear my crown until the day you marry a woman who is your equal in beauty, intelligence and wealth." Raphael's vanity prevents him from finding such a bride until an unknown maiden appears at the palace. Sent by a mysterious talking wolf, Rosamund dazzles Raphael with her beauty, her intelligence (she is the first to recognizes his loneliness) and her wealth ("There is nothing I desire that I do not already possess"). However, she refuses his proposal of marriage, pointing out that, by his own admission, she is more than equal to him; his task is to earn her love. Illuminating the six chapters are Vagin's elegantly detailed paintings, each featuring a smaller bordered scene laid atop a full-page illustration: the opulent scarlet and golds of the royal interiors are strikingly juxtaposed with the smoky blues and greens of the lush countryside; pewter-toned borders surround the text itself. The richness of both word and image renders an entertaining and enchanting story. Ages 7-10.

Katherine Paterson is the author of more than 30 books, including 16 novels for children and young people. She has twice won the Newbery Medal, for Bridge to Terabithia in 1978 and Jacob Have I Loved in 1981. The Master Puppeteer won the National Book Award in 1977 and The Great Gilly Hopkins won the National Book Award in 1979 and was also a Newbery Honor Book. For the body of her work she received the Hans Christian Andersen Award in 1998, the Astrid Lindgren Memorial Award in 2006, and in 2000 was named a Living Legend by the Library of Congress.